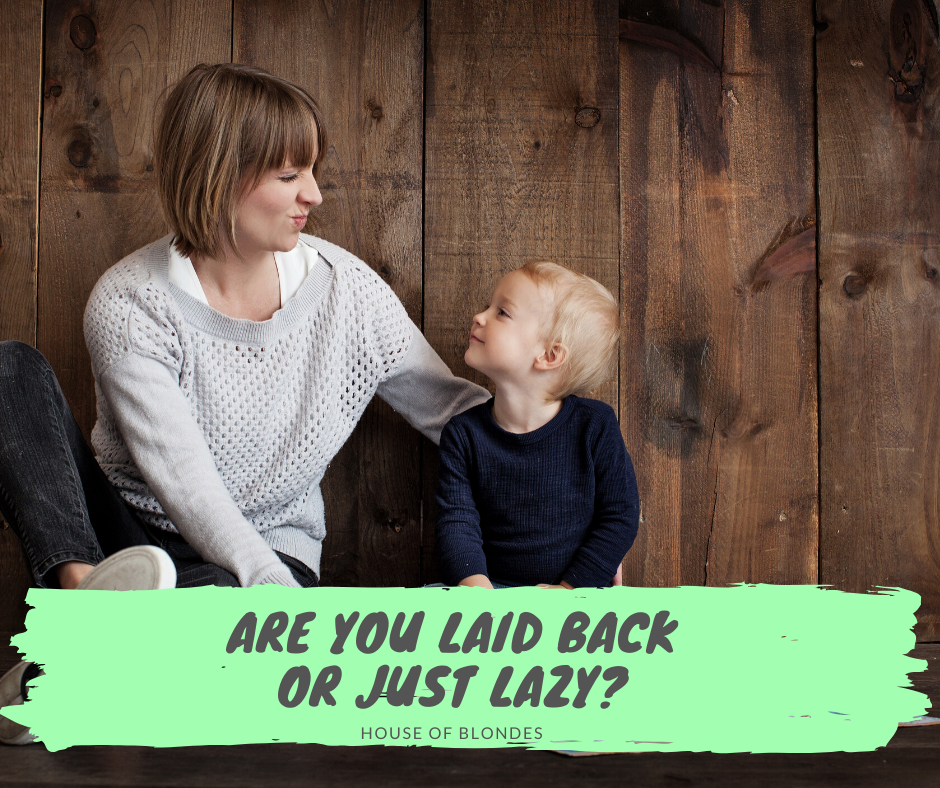 I often tell people that I am one of the most laid back people you will ever meet. It’s something I’m proud of, and think other people should try to imitate. But I’ve recently started asking myself a question and since been internally evaluating myself to find the answer: Has my laid back personality led to laziness in my parenting?

Google defines laid back as being relaxed and easy going. I would definitely say this applies to my parenting style. I say this because I can usually just go with the flow, adapt easily, and leave the decision making up to someone else because I genuinely don’t care about certain things. I have no problems letting my kids wander around our small church because they are with people we know. I’m not overly cautious in many aspects and almost indifferent when they fall and hurt themselves, although if there is blood I do show a bit more concern.

But I’ve realized recently that my children have developed some bad habits: not obeying, not even really listening, showing absolutely no regard for personal boundaries, things like that. So one day, I began to really look at why they were acting like this and how these things happened, I realized it largely my fault. I had not been good at discipline and training. I had grown lazy.

Once again, I turned to google for a definition. To be lazy means to be unwilling to work or use energy. I’m sure most lazy people didn’t just wake up one day and say “I think I’ll be lazy from now on.” No I think the fall into lazy habits happens most often when we aren’t looking. For me, my desire to be a laid back parent bred laziness.

How I’ve Been Lazy

What does it look like for a parent to be lazy? Extreme cases could be a parent who will not leave the couch or put down the phone to take care of the basic needs of the family. (Obviously, there are those who have chronic illnesses that hinder their energy and ability to care for the many needs of those around them. If that’s you, you get a pass.)

Failure to execute good training techniques and habits. This is probably my biggest struggle. Partially because I don’t like conflict, which is unavoidable in child training, but also because of the amount of effort it takes. I can’t just give one “Don’t do that” and then the kids magically never do whatever “that” is again. No, it takes repetition, consistency, and effort that I honestly don’t want to exert.

Not spending time with my kids. The older my kids get, the harder it is for me to play with them. They used to be perfectly content on the floor with the toys just sitting around them. But then they started walking, and then running, and now their games are playing superheros and tag and all of these other activities that require a lot of energy. In short, its hard to play with my kids because it requires energy that I am unwilling to use.

Taking the easy way out. There are some offenses committed by my kids that cannot be ignored, but rather than take the time to correct and discipline them in a Biblical way, I choose to simply say “Don’t do/say that anymore” and move on. My excuses range from being elbow deep in dirty dishes to “I really just don’t want to” (if I’m being completely honest).

The Bible’s take on Laziness

Many memes have been made to make lazy parenting harmless and humorous. But the truth is God has some very strong opinions about the lazy person.

Proverbs warns that laziness leads to destruction and poverty

We look at this and say “yes that makes total sense. You don’t work, you don’t make money. But what does this have to do with parenting?” Well let’s look at it this way. Proverbs 10:1 says a wise son makes glad his father, but a foolish son is a sorrow to his mother.” This should raise the question, “How did the son become wise?” Answer? He was trained and diligently taught in wisdom.

The often quoted proverb “Train up a child in the way he should go…” (Prov. 22:6) is another reminder that it is our jobs as parents to train our kids which involves correction and discipline (Prov. 22:15). And let’s not forget the famous verse, Deuteronomy 6:7 “You shall teach [God’s commands] diligently to your children, and shall talk of them when you sit in your house, and when you walk by the way, and when you lie down and when you rise.” So not only does lazy parenting set you up for more sorrow in the long run, it’s disobedient to the calling God has given us.

Parenting is hard. Not just because of the physical demands, the emotional roller-coaster, or the day to day, sometimes minute to minute self-denial. It’s hard because it goes against our desire to look out for self. For me personally, when it comes to the “fight or flight” response, I will choose flight every time. I would much rather hide in my closet then deal with the disobedient, disrespectful attitudes of my children. It’s much easier to give into the whining and make it stop in the moment, then put in the work to make it stop in the long run. It’s much more enjoyable for me (because I don’t have to leave my conversation) to ignore my kids running around the church where I can’t see them then to train them to stay nearby.

But as I’ve said, I realize now that by opting for the “easy way out” I have fallen into habits of laziness, selfishness, and disobedience.

Do Not Grow Weary

If you too have realized that you are a lazy parent, then there is hope. The first thing to do is confess your sin of laziness and disobedience to God, and then confess your need for His strength because, as I’ve been reminded of the hard way repeatedly, I can’t do this without Him. Then, commit to following through on discipline. I won’t tell you what method of discipline to use or how you should go about “cracking down” or reinstating it all together. What I will say is remember that this will be hard. That (if you’re like me) your natural instinct will be to give in or ignore. Don’t listen to your instincts. Listen to the Word of God. Look up and memorize a few of the verses listed above and use them to break your bad parenting habits. And in those moments where you want don’t think you can do one more discipline session, where you want to quit because it’s hard and you’re tired remember this:

And let us not grow weary of doing good, for in due season we will reap, if we do not give up.

Don’t give up. Don’t lose hope. Remember His grace and strength are sufficient in all things (2 Cor. 12:9).

2 thoughts on “Are you Laid Back, or Just Lazy?”

This site uses Akismet to reduce spam. Learn how your comment data is processed.